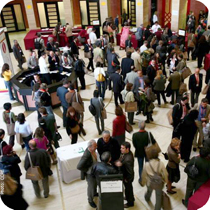 Call for candidacies: Be the host of CEMR's 2012 General Assembly

The Council of European Municipalities and Regions (CEMR) has issued a "call for candidacies" open to European cities and regions interested in hosting its 2012 General Assembly.
Every 3 years, CEMR organises its General Assembly.which brings together around 1000, or more, local and regional elected representatives and experts, from Europe and beyond, to debate key issues of the day. The Assembly lasts two and a half to three days, with high-level political debates organised in plenary sessions and parallel sessions devoted to practical specific themes.
Interested local and regional governments should carefully review the terms of reference and the guidelines. Deadline for the submission of proposals: 30 January 2009.
CEMR's 2006 General Assembly took place in Innsbruck, Austria. Over 1200 participants representing municipalities, towns, provinces and regions from 36 European countries participated in the event. It ended with the adoption of the Innsbruck declaration. CEMR's next General Assembly will be held in Malmö, from 22 to 24 April 2009.