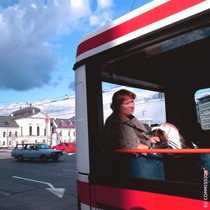 A good legal framework for public authorities to provide public passenger transport services: it is in these words that Angelika Poth-Mögele, head of policy at the Council of European Municipalities and Regions (CEMR), reacted to the new regulation adopted in second reading by the European Parliament, on 10 May 2007.
The regulation's objective is the opening of public passenger transport services by rail, road and inland waterways to greater competition. It also aims to provide the legal framework on how these services can be organised and financed in the context of the EU single market.
With the adopted text, the European legislator confirms that many inland passenger transport services cannot be operated on a commercial basis and therefore allows the competent public authorities to choose how the services are provided in the area that they administer. They can decide to entrust an internal operator with the service, if national rules allow, or tender the services out to an external operator.
This is an important decision in the context of the debate on the provision of public services in the internal market, states Jacques Auxiette, Chair of CEMR's working group on transport, President of the Conseil Régional des Pays de la Loire. I am pleased to see that key actors like CEMR were successful in convincing the European legislator that the principle of local and regional self-government gives each authority the right to choose how transport services should be delivered and financed.
Angelika Poth-Mögele, head of policy at the CEMR, declares that the members of the Parliament proved that they are willing to take into account the interest of public authorities and the services they provide to the citizens.
Background information
The new regulation will replace the legal framework that goes back to 1969, lastly amended in 1991. The European Commission had presented a proposal for new legislation in 2000 and the European Parliament had adopted numerous amendments in the first reading in 2001. However, the proposal was blocked in the Council and the Commission had withdrawn its proposal to present a modified text in 2005. In November 2006, the Council had adopted the common position, which was voted in second reading in the Parliament on 10 May 2007; making the whole legislative process unusually lengthy at 7 years from start to finish.
Documents
The consolidated text as adopted by the European Parliament
CEMR position paper on the proposal for a regulation on public passenger transport services by rail and by road