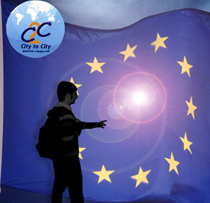 The European Center for Migration policies is born!

The European Centre for Migration Policies has been launched officially at the occasion of a round table on high skilled labour flows, in Brussels, on 18 April 2007.
Some 200 participants attended the round table hosted by MEP Vittorio Prodi, at the European Parliament and moderated by the Council of European Municipalities and Regions' (CEMR) head of press and communication, Patrizio Fiorilli.
The speakers included MEP Richard Howitt (UK); the Calabrese Under Secretary to the Presidency, Vincenzo Falcone; the chair of CEMR's working group on Employment and Social affairs, Mathias Schulze-Böing; The secretary for immigration of the Catalonia government Oriol Amorós (S); Ali al Hadaui, advisor to the Amsterdam municipality; the Minister for Migratory policies of the Veneto region Oscar de bona (I) and the Norrboten County Council Commissioner Monica Carlsson (SV).
Stefania Pasquetti represented the DG Justice, Freedom and Security of the European Commission, since the Commission will publish a directive on the conditions of entry for high skilled workers, next September.
Calabria being the leading partner in the project, Vincenzo Falcone opened the debate by explaining what the centre will be about: the European Centre for Migration Policies has been founded in the framework of the City to city project, he explained. Its main mission will be to act as the bridge between Europe's local and regional government, and the European Commission. As such it fills a gap since until now, the EU institutions had to approach local and regional governments almost one by one on migration issues. The Centre will address all issues connected to migration, including the integration of migrants, socio-economic aspects, financial aspects, as well as relations with the countries of origin.
Vincenzo Falcone also stressed that Calabria has been involved in inter regional cooperation beyond the City to city project, having established relations with many European regions, either bilaterally or in other projects.
MEP Richard Howitt stressed that it is not enough to attract highly qualified migrants from third countries: We must make sure that they are not underemployed, that they found positions that mirror their qualifications.
Stefania Pasquetti told the floor that by 2050 one third of the EU population will be over 65 years of age: By 2050, the share of population in working age is expected to decrease by 52 millions. These figures clearly highlight the contribution immigration has and will have to sustain Europe's competitiveness, and in the face of our demographic challenge. To improve economic growth, Europe must improve its ability to attract the immigrants it needs, Europe must become a real magnet for highly skilled immigrants. The directive on the conditions of entry and residence for high skilled workers may include an EU 'Green or blue card", or other measures to facilitate mobility between Member States.
The chair of CEMR's working group on Employment and Social Affairs Mathias Schultze-Böing, recalled that the 2006 Sevilla Declaration on the role of European local and regional governments in relation to migration, adopted by the Council of European Municipalities and Regions: we stated that the adoption of a European policy on migration is a vital element to assist local and regional authorities to implement effective local policies, and that a successful migration policy requires a high level of co-ordination and partnership between European, national, regional and local authorities, as well as with private partners and civil society.
Oriol Amóros echoed these views, calling for partnerships between municipalities and private companies; he also stressed that though Catalonia has a large proportion of immigrants (from Africa and Latin America), it does not experience major problems of integration. For his part Oscar de Bona stated that high-skilled migrants are especially needed in small and medium enterprises.
Ali al Hadaui spoke about his personal experience as the son of a Morrocan immigrant who moved from France to Holland, while Monica Carlsson stressed the need for high skilled immigrants in large but sparsely inhabited regions.
In the ensuing debate, questions were raised about a number of issues such as the right (or not) for high skilled immigrants to bring their relatives to the EU, the moral question about depriving poorer countries of their intellectual and professional elite, or the scope of the future directive.
City to City and the European Centre for Migration Policies

City to city is a European project funded within Interreg IIIC South. It focuses on the integration of migrant workers, and brings together partners from 7 countries (Germany, Italy, Latvia, United Kingdom, Spain, Sweden and Turkey).
The European Centre for Migration Policies was conceived within City to city. Beyond its role as a bridge between local and regional governments and the EU institutions, it will gather data about immigration in Europe.