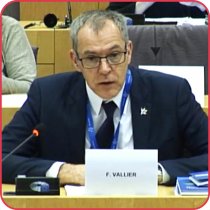 MEPs are prepared to reject the European Council’s proposal for Europe’s next long-term budget, on grounds that it would mean massive cuts to cohesion policy. This was made clear today at a hearing of the European Parliament’s Committee for Regional Development (REGI).

REGI Committee Chair Younous Omarjee spoke in categorical terms: “As of now there is only one message: if [European Council President] Charles Michel’s proposal does not move closer to that of the Parliament, then Parliament will reject it.”

CEMR representatives at the event were invited to present our work and positions on behalf of local governments. We exposed our activities as a knowledge hub for local and regional governments, as well as our policy positions, notably concerning the budget.

“We need to quickly find an agreement on the next multiannual financial framework, but not at any price”, said CEMR Secretary General Frédéric Vallier. “To cut cohesion policy, as drastically as have proposed the Commission and today the Council, would go against the new Commission’s ambitious objectives, notably for an environmental transition that is just for territories and people.”

As detailed in our analysis of the Just Transition Fund (JTF), the new instrument would have only limited added value insofar as it requires cofinancing from existing cohesion programmes (ERDF and ESF+), which can already be dedicated to environmental issues and retraining.

What’s more, under Council President Charles Michel’s proposal, the JTF’s €7.5 billion would not represent new funds, but would be taken from the European Agricultural Fund for Rural Development (EAFRD).

REGI MEPs also expressed their support for the Partnership Principle, under which local and regional governments must be consulted in the drafting of national cohesion spending plans. “The Partnership Principle must be at the heart of the current negotiations”, Omarjee said. “The projects eventually land in the territories themselves; municipalities must then be involved as much as possible in the funds’ implementation.”

National governments in the Council must still agree their position on the future long-term budget. Once this is done, negotiations between the Parliament and Council will begin, but a final agreement still seems months away. CEMR will work with other members of the Cohesion Alliance to ensure that the new budget is socially just and leaves no place behind.