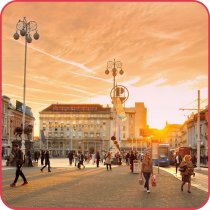 It's a paradox: whereas in Madrid the European Commission has been touting ambitious plans to make Europe the first carbon-neutral continent by 2050, in Brussels national governments will soon be debating whether to reduce the EU budget’s ambitions.

Addressing EU leaders ahead of this week’s summit, CEMR President Stefano Bonaccini said: “The EU will not be credible if it sets high objectives, like the European Green Deal, while removing the means for achieving them.”

In a recent letter to European Council President Charles Michel, Bonaccini and other leaders of the #CohesionAlliance asked that at least one third of the EU budget be dedicated to cohesion.

The #CohesionAlliance is calling for a timely agreement on the next Multi-Annual Financial Framework (MFF) for 2021-2027 to ensure a smooth disbursement of funds in the coming years. The Partnership Principle should furthermore be reinforced, ensuring that local governments are involved in the development of national cohesion spending plans.

New funds should not replace Cohesion

The Finnish presidency of the EU Council has proposed cutting cohesion spending by 12%, meaning a reduction of €44 billion compared to the previous financial period. While the other member states are expected to reject this proposal this week, cohesion continues to be under pressure.

Bonaccini said: “Such cuts pose a threat to local and regional governments’ ability to implement Europe’s ambitions, notably in terms of reaching the climate objectives of the Paris agreement and the Sustainable Development Goals.”

In the context of such discussions, it is particularly important that the creation of new funds does not come at the expense of cohesion. For example, support for regions most affected by the transition to neutrality should not be a repackaging of existing funds.

“Any new instrument such as the Just Transition Mechanism should supplement the existing European Structural and Investment Fund,” Bonaccini added.

The EU will not deliver the Green Deal without local governments

Whether we’re talking about making buildings more energy-efficient, increasing recycling or developing public transport, it will often be towns and regions taking the necessary measures to decarbonise our societies. As such, local and regional governments should become strategic partners to deliver the Green Deal.

The Commission states that the Green Deal must “bring together citizens in all their diversity, with national, regional, local authorities, civil society and industry working closely with the EU’s institutions and consultative bodies.” CEMR will be working to make sure that local governments are fully involved as the Green Deal is rolled out.

Traduire
The #CohesionAlliance is a broad coalition of organisations, including CEMR, which are pushing for a stronger and more visible Cohesion Policy. The Alliance’s letter to European Council President Charles Michel is available in 8 languages:
The #CohesionAlliance’s declaration outlining our common principles for the future of Cohesion is also available in the following languages: