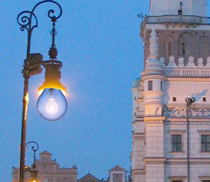 The Green Paper on energy efficiency: 'Right targets, but requires the involvement of local and regional governments"

CEMR broadly welcomes the Green Paper on energy efficiency, especially the proposed energy saving target, but doubts much can be achieved without the active involvement of local and regional government.
As far as energy savings are concerned, the European Commission has adopted the right approach, says CEMR secretary general Jeremy Smith. The target of 20% energy saving by 2020 strikes the right balance: a higher target might have been unrealistic, and a lower one would not have had a noticeable impact.
However CEMR is disappointed that the Green Paper fails to properly acknowledge the role of the local and regional government in the energy area.
Europe's local and regional governments are essential to the successful implementation of more sustainable energy policies, says Jeremy Smith. It is mainly at local and regional levels that the difference can be made; as the governance level closest to the citizens, Europe's municipalities and regions are ideally placed to promote energy efficiency through initiatives tailored to the situation in each commune, village, town or region. However this can not be done without an adequate financial and legal support from both the national and European levels.
CEMR also regrets that the Green Paper does not spell out a clear and long term vision on efficiency and climate change.
CEMR's full response to the Green Paper on energy efficiency
The European Commission's Green Paper on energy efficicency (in 20 languages)
CEMR's activities in the field of energy
CEMR takes the floor at managEnergy conference
Pim Koegler, acting chair of CEMR's network on Energy issues, presented CEMR response, as well as CEMR propositions for the upcoming EU action plan on energy efficiency, at the 5th ManagEnergy Conference, which took place on 7 and 8 February in Brussels. This conference is organised on an annual basis by the European Commission and brought together 400 participants from across Europe.
ManagEnergy's website (in over 20 languages)