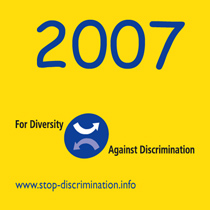 A website for the 2007 European year of equal opportunities

Some two months ahead of its official launch, the 2007 European year of equal opportunities for all has already its own website.
The website provides information on the national implementing bodies that have been appointed in 26 of the 27 countries (the EU 25 + Bulgaria and Romania). It also states the aims of the year and the actions and events planned throughout 2007.
Local and regional government's role in equal opportunities
The Council of European Municipalities and Regions (CEMR) will play an active role in the this field in 2007, mainly through the signing process of CEMR's charter for women and men equality in local life.
The charter was officially launched in May 2006 at CEMR's general assembly in Innsbruck. Since then, over 100 municipalities have already signed it. Its aim is to encourage local politicians to sign it, thus committing themselves publicly to implement the measures in the charter in their municipalities.
The 2007 European year of equal opportunities for all (in English, French and German)
CEMR's European charter for equality of women and men in local life