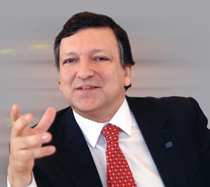 José Manuel Barroso to CEMR's general assembly: "I hope central governments respect the principle of subsidiarity in the Member States"

The President of the European Commission, José Manuel Barroso sent a message of support to local and regional governments, at the 23d general assembly of the Council of European Municipalities and Regions, on 10 May in Innsbruck.
In the 55 years since the Council was set up, you have effectively and usefully represented the interests of your municipalities and regions in contacts with the European institutions. In doing so, you have helped to carry the process of European integration forward. While our cooperation has been fruitful in the past, it is vital for the present and the future. Today, more than ever before, Europe faces challenges on all sides: rapid globalisation, stronger international competition and slower population growth, to name just a few key issues.

We must adopt a European response to these global challenges, but we in Brussels cannot find the solutions on our own. We have to step out of the Brussels microcosm and talk to those involved on the ground in order to familiarise ourselves with their concerns. European integration is not a top-down process.
I am very committed to the principle of subsidiarity: I strongly believe that decisions should be taken by the level that is closest to the citizens who are concerned by them. Therefore, I am convinced that regions and municipalities have a particular role to play. The national governments are rightfully asking the European institutions to respect the principle of subsidiarity. I hope that in the Member States, they do respect this principle as well - and give the competences to the most appropriate decision-making level: local, regional, or national.
I congratulate you on the choice of the main topic of the meeting: the future of services of general interest deserves a deep debate and a good analysis of its fundamental aspects. This issue does not concern the European level only. Of course, we intervene to ensure the Treaties are respected and to regulate services that spread beyond national borders or that require cooperation between national states. But on this issue, the principle of subsidiarity plays a key role: most services are the responsibility of local and regional governments. The proximity link between these authorities and the citizens is a guarantee of efficiency and social usefulness.

CEMR general assembly is taking place between 10 and 12 May in Innsbruck. Over 1,200 local and regional representatives from 35 European countries are attending. Besides the future of public services in Europe, the main topics include the launch of CEMR's charter for equality between men and women in local life, a session on the role of local and regional governments in tomorrow's Europe, as well as debates on town twinning, local government in South East Europe, and the UN's Millenium Development Goals.
The full message of José Manuel Barroso