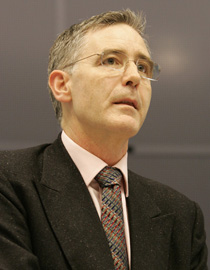 When it comes to deciding how best local and regional services should be delivered, CEMR members have various views. But all our members are united behind the principle that such choices must be exercised by local and regional government. This is one of the main point of CEMR secretary general's speech at the hearing on the White Paper on services of general interest (SGIs) organised by the European Parliament's Committee on Economic and Monetary Affairs (Brussels, 29 March 2005).
Jeremy Smith went on saying that it is not for the European Union to tell local governments how they should organise their affairs. He reminded the members of the ECON Committee that though the Council of European Municipalities and Regions welcomes the White paper on SGIs, it feels the White Paper does not adequately analyse the role and situation of public services at the local and regional level.
Jeremy Smith also stressed that there is a need to clarify the distinction between services of general interest and services of general economic interest (SGEIs), since the EU treaties only refer to SGEIs. CEMR firmly believes that local services that are social in purpose and non-commercial in character, and which deliver services locally without competing on other markets, should not be considered "economic".
In his speech, he also criticised the European Commission for undervaluing the role of direct service delivery by local governments, by the ideological assumption that the private sector is always better... The private sector is sometimes the best option, but far from always!
CEMR's Secretary General also aired concerns about the implications of the draft Services Directive for local and regional government: It is not simply a question of excluding public services and SGIs from the scope of the directive; it is also essential that local and regional governments can set and enforce quality standards in the public interest. The directive reverts this by the principle of the country of origin ((The legislation of the country from which service provider comes applies, not the legislation of the country in which that service is provided).
CEMR's latest positions on this issue