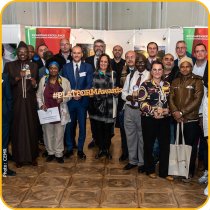 Local municipalities in the EU and third countries are partnering up to boost local economic and social development, exchange best practices and promote civic participation.

Marsassoum, a small town on the Soungrougrou river in Senegal, has worked with the Belgian municipality of Anderlecht since 2018.

“The partnership responds to our needs at the local level,” Sény Mandiang, mayor of Marsassoum, told EURACTIV, explaining how Anderlecht has provided support to review the town’s planning documents and initiate local projects.

Under the partnership with the Belgian municipality, Marsassoum has set up a shared space called ‘Le Marsa’ to process and sell local products and a municipal fund to finance regional projects, aimed at improving the inhabitants’ living conditions, especially among those marginalised or more vulnerable.

At the same time, the partnership is helping Anderlecht further develop its social cohesion and inclusion policies, especially when it comes to deciding how to spend the local budget, through a process called participatory budgeting.

“It’s never possible to implant something from one culture to another,” Julien Milquet, Anderlecht’s deputy mayor, told EURACTIV during an event in Grenoble, where the two municipalities received an award for their cooperation.

“But we can get inspired,” he added, pointing to the all-encompassing participatory budgeting process in Marsassoum where each part of the local budget is decided by citizens.

While this participatory exercise might never come to involve as many citizens as in Marsassoum, it can help change the political culture of Anderlecht’s inhabitants and foster civic participation, Milquet said.

According to Lorenzo Kihlgren Grandi, director of City Diplomacy Lab, these city-to-city partnerships can promote greater citizen participation, as “people are not just targets of policies, but become partners” in shaping them.

In some cases, cooperation between cities on different continents can be boosted by the local diaspora looking at ways to promote economic development back in the region they come from.

According to Esoh Elamé, project manager involved in another partnership between Haskovo in Bulgaria and Douala in Cameroon, the diaspora is becoming more and more “dynamic” and eager to bring back expertise, resources and support.

For instance, the Senegalese diaspora in Zaragoza, Spain, pushed for a partnership with Ouonck, a small town 20 kilometres south-west of Marsassoum, to support the local production of a food supplement called spirulina, which plays a key role in reducing malnourishment.