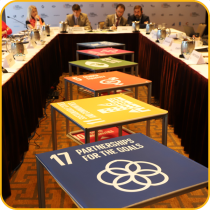 This article was initially published by PLATFORMA.

PLATFORMA and CEMR’s joint delegation of  local and regional elected officials was everywhere in New York from 15 to 18 July. At the United Nations High-Level Political Forum (HLPF), they called for accelerated action to localise the Sustainable Development Goals (SDGs). They also had the chance to exchange with various representatives of UN agencies, including  UN Secretary General, António Guterres. They also shared views with European Commission Director-General for International Cooperation and Development, Stefano Manservisi.

No Global Goals without towns and regions

At the Local and regional governments Day, organised by the Global Taskforce (GTF), the delegation exchanged with the President of the General Assembly, María Fernanda Espinosa and the Executive Director of UN Habitat Maimunah Mohd Sharif.

Mayors and presidents of regions showed how local acceleration is key to achieve the Global Goals. They insisted that local and regional governments share the sense of urgency expressed by the UN.

The key role of partnerships

Later on, the delegation attended the side event organised by FEMP and PLATFORMA where elected officials discussed how alliances are fundamental for the acceleration of the 2030 Agenda and for inclusive strategies for sustainable development (...)

Read the full article on platforma-dev.eu.