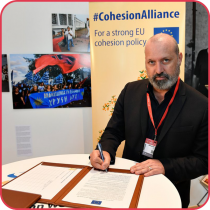 Did you know that thanks to cohesion policy, an estimated 1 million new jobs were created in the EU between 2007 and 2014? This is just an example illustrating how cohesion policy brings change to our citizens’ lives. However, increasing financial pressure is threatening this policy of being weakened in the next EU budget in 2020.

At CEMR we believe that cohesion policy should not only remain one of the EU’s fundamentals, but it should also be strengthened with a reinforced territorial dimension, and more flexible and simpler rules. This is why we joined the Cohesion Alliance that was launched on 11 October, during the European Week of Regions and Cities (EWRC).

During the kick-off event, the President of Emilia Romagna and CEMR, Stefano Bonaccini, stood up for cohesion policy and reaffirmed his position: “We want an ambitious cohesion policy for all regions, more and less developed, beyond 2020. It must come with an adequate budget to be able to respond to the tests Europe and its territories are confronted with: digitalisation, migration, employment or the circular economy”.

He also called for “more flexible rules to adapt the choice of investment to each territorial context. The investment priorities should be determined according to local and regional needs, not uniformly earmarked upstream at EU level.”

The Cohesion Alliance is a coalition of those who believe that EU cohesion policy must continue to be a pillar of the EU's future. Officially launched on Monday 9 October, the Alliance was created through cooperation between the leading European associations of towns, cities and regions* and the European Committee of the Regions (CoR). We demand that the EU budget after 2020 recognises the clear added value of cohesion policy and makes it stronger, more effective, visible and available for every region and municipality in the European Union.

From national, regional and local governments to SMEs, NGOs, schools, universities, cultural organisations, we invite everyone to join this alliance, by signing the official declaration.

New alliance born to defend the future of cohesion policy