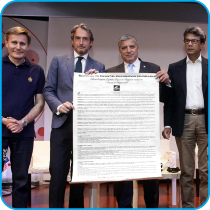 CEMR is mobilising Greek and European towns and cities to work together to overcome the refugee crisis.

Over a hundred Greek and European mayors gathered in the island of Samos (Greece), during a conference on refugees organised by our Greek association KEDE from 2 to 4 May. They gathered to speak as one, to mobilise all European mayors to call for a real common asylum policy.

These mayors came together after CEMR’s call for a real common European asylum policy, a logical and essential step in working together to find solutions to the refugee crisis.

CEMR President and mayor of Santander Iñigo de la Serna, who attended the event, stated: “Without the engagement of local and regional government as well as volunteers and practitioners working on the ground, the European response to the crisis would have been even more discouraging.”

For CEMR, the most urgent steps that need to be taken are the following:

These steps are absolutely necessary if we want towns and cities to be able to overcome the refugee crisis.

KEDE President and mayor of Amaroussio, Giorgos Patoulis, stated: “Local governments showed there could be a humanitarian approach to the management of the refugee crisis. National governments should do the same, and all European towns and cities need to work together to develop a pan-European refugee response plan.”

The refugee crisis does not stop at a single European city’s borders. Refugees are settling in towns and cities all across Europe, and local governments face common challenges – CEMR cannot stress enough how important it is for local governments to work together to overcome them.

As long as our towns and cities face the challenge of the refugee crisis, CEMR will keep on mobilising all European mayors, and will keep on calling upon European institutions to set up a common asylum policy that finally takes into account the real needs on the ground.