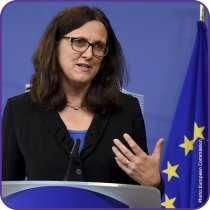 "Publics services will not be affected by the agreement," stated the European Commissioner for Trade

"There will not be any binding provision in this agreement that would force local governments to privatise their public services against their will. I can guarantee that." asserted EU Commissioner in charge of Trade, Cecilia Malmström, talking about the Transatlantic Trade and Investment Partnership (TTIP) to the French online magazine La Gazette des Communes.

As she was requested to react to CEMR’s demand to exclude public services from the scope of TTIP, Commissioner Malmström claimed that the future agreement would not affect the way public services are organised, funded and delivered in Europe.

Commissioner's statement goes hand in hand with CEMR’s position, which is very much supported by the European Parliament: through a resolution voted in a plenary session on 8 July, the Parliament called the Commission to ensure that fundamental services like health care, public transport or waste management remain excluded from the free trade agreement.

Furthermore, CEMR warned that alongside its members it will pursue its campaign to make sure that TTIP, which may have positive economic impacts on municipalities and regions, does not disrupt the European model of services of general interest and public services delivery.

CEMR position on TTIP: Commitments must comply with local and regional autonomy