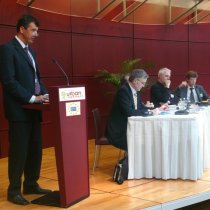 As EU policies have an increasing impact on our urban and rural areas, the Council of European Municipalities and Regions (CEMR) and the European Parliament Intergroup on URBAN-Housing brought over 150 participants.from over 20 countries to their urban-rural dynamics conference, on 12 June 2007 in Brussels.
One of the priorities of the German presidency of the EU being territorial cohesion, the German State Secretary for Transport, Building and Urban Affairs, Engelbert Luetke-Daldrup, told delegates that the German government intends to put this issue on the agenda of the European Council meeting, in March 2008: Although the EU is not responsible for spatial and urban planning, many EU policies have a direct impact on urban and rural development. Therefore, Germany believes that the European Union should play a bigger role in this field; it must ensure that all European policies take the territorial dimension into account.
The vice chair of the Intergroup URBAN-Housing, Oldrich Vlasak, called the conference a perfect example of the cooperation between European Institutions and local and regional associations such as CEMR: The Council of European Municipalities and Regions brings together both urban and rural interests, and covers a broad variety of local realities and administrative structures. That makes it particularly attuned to any debate on how to bring forward a more integrated territorial governance.
The president of the French association of CEMR (AFCCRE), Louis Le Pensec, aknowledged the role of the Council of European Municipalities and Regions: CEMR is the best framework in which to initiate a discussion on urban-rural partnerships. Through its national associations, it brings together both urban and rural interests. It is also a unique forum for debates among local and regional elected representatives from various territorial origins, but whose common concern is territorial cohesion and solidarity. Yet, there is a paradox: today, everybody agrees on the need to coordinate policies aimed at local and regional authorities, and the need for an integrated strategy, but the European policies and financial instruments that come with them have never been so distincts and far from each other.
Conference participants also called for action at EU level. Jan Olbrycht, vice-chair of the Intergroup URBAN-Housing, stated: We need to think carefully whether we have the right balance and the right instruments, whether the EU regional and rural development policies are doing enough to encourage and support urban-rural partnerships. How do we bring together the different instruments and different European Commission directorates to support integrated policies? The upcoming review of the EU budget in 2008 should be an ideal opportunity for the EU to revisit this issue and start working more seriously on territorial cohesion.

The chair of the Intergroup URBAN-Housing, Jean-Marie Beaupuy, stated that these days, our towns and the countryside around them constitute a jigsaw, and each of its pieces relies on the others on such issues as housing, transport, or activities areas and green areas.

Most of the views expressed by the participants echoed the position of the Council of European Municipalities and Regions on the European Territorial Agenda. The secretary general of CEMR, Jeremy Smith, summarised them: Urban and rural areas are becoming more and more interconnected on a wide range of issues such as transport, housing, employment or natural resources. Of course, there are many different types of partnerships between rural and urban areas, each being adapted to its national or regional context; however, they all have points in common: they must have a bottom-up approach, they must be flexible and certainly be based on a long-term strategy and commitment.
Other speakers included representatives from the European Commission including Ronald Hall, Director at the DG Regional Policy, Nikiforos Sivenas, Director at DG Agriculture, as well as Mario Pezzini from the OECD.
Note: The European Territorial Agenda is a non-binding initiative by Member States; it consists of a set of policy recommendations and commitments that aim to encourage sustainable economic growth and job-creation in Europe.
The organisers
Council of European Municipalities and Regions (CEMR) - the European umbrella organisation of 50 national associations representing local and regional government in 36 countries; is actively involved in the discussions on how to promote territorial cohesion and competitiveness in the EU, reflecting the needs and opportunities of both urban and rural communities.
Intergroup URBAN-Housing - the European Parliament's intergroup aiming at strengthening the urban dimension in EU policies. It brings together more than 70 Members of the European Parliament and some 60 public and private partners (European cities, networks, NGOs...).
CEMR's response to the European Territorial Agenda and the Leipzig Charter on Sustainable European Cities
The programme of the conference
The list of participants
The presentations [1-2-3-4-5-6-7-8-9-10-11-12]
Louis Le Pensec's speech