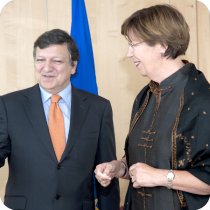 European local and regional leaders called on European Commission President Barroso to put forward 'ambitious EU budget proposals" in order to stimulate the economy and asked that municipalities and regions be given.an active role in the design and implementation of the Europe 2020 strategy.
This call was made two weeks prior to the unveiling of the post-2013 EU financial framework during a meeting held today in Brussels between the presidents of associations representing local and regional authorities, the President of the Committee of the Regions, Mercedes Bresso, and the President of the European Commission, José Manuel Barroso.
The local and regional leaders stressed that the new EU budget must be 'substantial" if it is to respond to the challenges ahead and to support economic recovery. A fair share of the upcoming budget should be dedicated to cohesion policy and could, if needed, be based on own resources.
Local and regional leaders also underlined that the Europe 2020 strategy must create a sense of 'ownership" among all levels of government, as a large number of the strategy priorities concern local and regional authorities.
Finally, local and regional leaders stressed that political developments at the EU's external borders are a historical challenge that requires new and effective solutions.
Committee of the Regions President Mercedes Bresso said: 'The Commission must now send a clear signal to economic policymakers and citizens. The future budget has to reflect the EU's new ambitions and the irreplaceable role of cohesion policy in supporting public and private investment. It must empower local and regional authorities, and must support their efforts to deliver the Europe 2020 targets." Ramón Luis Valcárcel Siso, First Vice-President of the Committee of the Regions and President of the Murcia region (Spain), added: 'We also need a more flexible EU budget. My home region, Murcia in Spain, was recently hit by a devastating earthquake. Recovery efforts will require large amounts of money and will have a great impact on our regional development priorities and spending. However, our EU regional aid programme was agreed in 2006 and runs until 2013. In the future, we should be able to quickly realign available EU funding to respond to such situations. In general, more flexibility will be desirable."
Jean-Yves Le Drian, President of the Conference of Peripheral Maritime Regions (CPMR) and President of the Bretagne region (France), underlined: 'Solidarity is the root of Political Europe. Without solidarity, Europe would have been no more than an economic free trade area. This solidarity is currently being undermined by issues related to financial stability and the overall amount of the EU budget. I am very concerned once again to see the Europe of tomorrow being shaped within the confines of the Member States, with no involvement on the part of the regions and no strong and clear goal. For this reason, we are asking for a coherent budget capable of meeting the goals of the tomorrow's Europe and giving prominence to a cohesion policy for all regions and all citizens."
Partnership makes a difference

Jean-Luc Vanraes, President of the Conference of European Regions with legislative powers (REGLEG) and Minister of the Brussels-Capital Region, responsible for Finance, the Budget and the External Relations, emphasised: 'Giving a central position to subsidiarity is to defend our democratic values. The heightening of the awareness of all the levels of power - from the citizen to the European institutions through the Member States - is a prerequisite to make Europe a space where the citizen is respected and to make the European project one realized for and by the citizens."
Annemarie Jorritsma, Co-President of the Council of European Municipalities and Regions (CEMR) and Mayor of Almere (Netherlands), called on 'the European Commission President to bring the provisions of the Lisbon Treaty to life by supporting a system of governance in partnership. European, national, regional and local authorities must cooperate in a spirit of partnership if we hope to successfully address the challenges Europe is currently facing. We need to notably mobilise citizens, industries, academics and NGOs, and invite them to join us in achieving true territorial development and cohesion in Europe."
Reform of cohesion policy

Karl-Heinz Lambertz, President of the Association of European Border Regions (AEBR) and First Minister of the German-speaking Community in Belgium, stated: 'European territorial cohesion has a fundamental meaning in border regions. They are areas where Europe grows together, but they also face important obstacles and challenges, even 20 years after the completion of the internal market. A strong cohesion policy is an essential instrument for these areas."
Nazario Pagano, President of the Conference of European Regional Legislative Assemblies (CALRE) and President of Abruzzo Regional Council (Italy), said: 'In support of the position expressed by the European Parliament on 8 June, the European Commission should introduce a category of "intermediate Regions" whose level of per capita GDP is between 75% and 90% of the EU average, for the future planning period of European structural funds. In the light of the recent Mediterranean crisis, recognition of a "common European border" and an appropriate revision of the Schengen provisions would be desirable. On behalf of the many CALRE Regions having to deal with migratory flows, I call on the European Commission to continue its dialogue with the Southern Mediterranean countries on the themes of migration, mobility and security."
Strong European neighbourhood policy

Michèle Sabban, President of the Assembly of European Regions (AER) and Vice-President of the Ile-de-France region, underlined 'We welcome with satisfaction the recent EU communication on the reform of the European Neighbourhood Policy (ENP), which will help to ensure the political stability of certain eastern European states. As regional democracy is a key element of any progress towards democratisation, the regions should become true partners, and not merely beneficiaries, of the ENP. These voluntary politics should also be extended beyond the borders of Europe, particularly in light of the recent developments in North Africa, to support the people. Together, strengthened by our experiences, we should help these new democracies carry out their decentralisation process."
Common message of the association presidents presented to Barroso during the meeting (DE, DK, EN, FR, IT, NL).
Pictures and broadcast quality video material of this meeting are available, please contact photocor@cor.europa.eu with your requests.
For more information, please contact:
Council of European Municipalities and Regions
Emilie Melvin
Tel.: +32 (0)2 500 05 34
Mobile: +32 (0)485 145 988
emilie.melvin [a] ccre-cemr.org
Committee of the Regions
Michael Alfons
Tel.: +32 (0)2 546 8559
Mobile: +32 (0)498 98 99 19
michael.alfons@cor.europa.eu