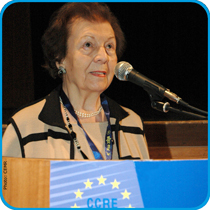 Founder and honorary director of the European Commission Information Unit for Women, Fausta Deshormes, passed away on Saturday 2 February 2013.

Fausta Deshormes helped build the very foundations of the European Union, having been there at the start of the European construction.  Her involvement at European level encouraged the Council of European Municipalities and Regions (CEMR) to take specific action in favour of equality between women and men.  Indeed, she helped kick-start the work undertaken by CEMR’s network on gender equality and secured the European Commission’s support in the organisation of CEMR’s first Conference of elected women, held in Pisa in 1983.

Deshormes’ progressive spirit contributed to her strong commitment to Europe until the very end.