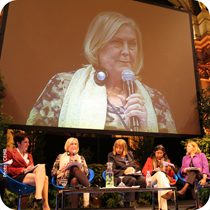 The Council of European Municipalities and Regions (CEMR) is pleased to announce the launching of an online tool to support European municipalities and regions working to.promote the equality of women and men at the local level.

The website was created in the framework of the Observatory on the European Charter for Equality of Women and Men in Local Life and is available in both French and English.  The website’s various features will include:

- Guidelines for the elaboration, implementation and monitoring of an action plan for equality at the local level, such as the City of Malmö’s plan to integrate the issue of gender equality into all of its activities, initiatives and services by 2013.  Indeed, Malmö is working towards ensuring the equal distribution of resources, power and influence among people of all sexes and backgrounds, including with regard to employment and working conditions.

- A dedicated atlas, allowing users to discover the municipalities that have signed the European Charter in Italy or Spain, for example.  Users will also be able to consult and download some of the most innovative action plans developed by local authorities in Europe.

- An online platform for exchange, allowing for a municipality in Romania, for example, to exchange with a city in France on how the latter devised and implemented an action plan for the equal representation of men and women in their local administration.  It will also allow these two local authorities to set up a partnership in the field of equality should they wish to continue working together.

- Information in order for users to learn more about how their municipality can become a model town for equality, while learning more about the Charter and the various issues it covers.

The Observatory website is still under construction and will be further developed over the coming months. New features will include: a monthly online newsletter, a search tool for finding best practices implemented at the local level, and information on funding opportunities in your country.

The website was launched at the occasion of Global conference of local elected women on “gender equality, a priority for global development”, organised in partnership with CEMR at the initiative of Bertrand Delanoë, mayor of Paris, and Anne Hidalgo, first deputy mayor of Paris and chair of the Committee on Gender Equality of United Cities and Local Governments (UCLG), the worldwide organisation of local government.

The Observatory was launched in 2012 with the financial support of the Swedish government, via the Swedish Association of Local Authorities and Regions (SALAR).  It aims at following-up on the implementation of CEMR’s European Charter on Equality of Women and Men in Local Life, which now boasts over 1 300 signatory municipalities and regions.  By signing the Charter, local and regional authorities commit to the principle of equality between men and women and to implement the commitments set out within the Charter on the ground.