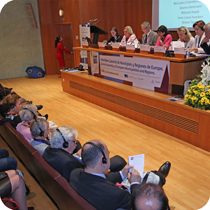 CEMR General Assembly: Gender equality - “We have to remain vigilant if we are to avoid the crisis taking us two steps back”

Anne Hidalgo, first deputy mayor of Paris and chair of the Committee on Gender Equality of United Cities and Local Government (UCLG), warned the participants of a session called “There’s no democracy without gender equality” that “we must remain vigilant if we are to avoid the crisis taking us two steps back in the fight for gender equality.”

Indeed, the crisis has brought a number of women in certain regions back into precarious situations, as they are often more hard-hit than men when public services are cut.  Moreover, training or employment agencies tend to favour more male-oriented professions, explained Mercedes Colombo Roquette, vice-president of the Province of Cádiz, deputy mayor of Cádiz and councillor on gender equality.

However, the geographic diversity of the session participants (Sweden, France, Spain, Turkey, Maroco...) allowed them to identify the progress made in different areas.  The leader of the Nakhil municipality of Marrakech and vice-president for the Northern Africa region of the Network of Local Elected Women of UCLG-Africa, Milouda Hazeb, encouraged twinning links between the North and South as “these allow municipalities to meet others having made much progress in the field of gender equality to exchange best practices and demonstrate what progress can still be made.”

Hidalgo concluded the session by inviting participants to attend a conference on women, to be organised from 30 January to 1 February 2013 by the City of Paris, in collaboration with the Council of European Municipalities and Regions (CEMR), UCLG and UN-Women.