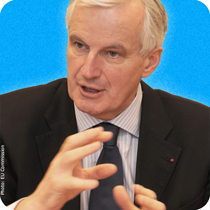 An AFCCRE* delegation met with European Commissioner for Internal Market and Services, Michel Barnier, on 23 April in Paris, so as to discuss the implementation of the Services Directive at the local and regional level.

'A solution to the French legal dispute concerning the pooling of services amongst local and regional authorities must quickly be found," declared Karine Daniel, Vice-Mayor of the City of Nantes. 'This situation is at the source of a legal insecurity and does not constitute a positive message of Europe for decentralised levels of government."

On his part, Michel Barnier favours the pooling of services, especially with regards to small municipalities. He voiced his will to respect the choices of municipalities without their being placed in an unfavourable position vis-à-vis the European level. The Commissioner declared his willingness in helping to find a solution to the legal dispute as soon as possible.

Barnier also reminded the delegation of his commitment to maintaining a dialogue with local and regional elected representatives and his will to 'reconcile the internal market with citizens and enterprises". The Commissioner showed himself to be conscious of the need to protect public services.

*The French Association of the Council of European Municipalities and Regions (AFCCRE) was composed of its President, Louis Le Pensec; Philippe Laurent, Mayor of Sceaux and AFCCRE Executive President; and Karine Daniel, Vice-Mayor of Nantes and AFCCRE Treasurer.