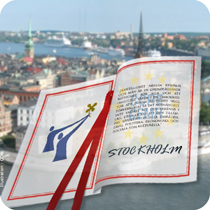 Stockholm Council signed the European Charter for equality of women and men in local life, on 27 January 2009.
The capital of Sweden was invited by the Swedish Association of Local Authorities and Regions (SKL) to endorse the.Charter. It has been elaborated by the Council of European Municipalities and Regions (CEMR) and contains a wide range of commitments to promote equality, across the range of its services and responsibilities.
Stockholms stad now joins 10 other European capitals who have formally pledged themselves to take practical action to tackle gender inequality. These include Vienna, Paris, Madrid, Athens, Brussels or Helsinki. All together, more than 830 local and regional governments from 24 EU countries have signed the Charter.
Background information
The Charter was launched at CEMR's General Assembly, in Innsbruck, on 12 May 2006. It is currently available in 19 languages. CEMR will organise a special session on the Charter and gender equality, at its next General Assembly in Malmö, from 22 to 24 April 2009.
CEMR received financial assistance from the European Commission (DG Employment and Social Affairs) for the development and drafting of the Charter.