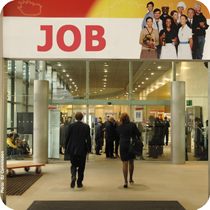 How to promote access of unemployed senior managers to the labour market? This was the main question raised at the seminar organised in Brussels, on 23 September 2008, in the framework of the Senior Competence project.
Unemployed senior managers constitute a special category among job-seekers. Access to the labour market is difficult and employers can be reluctant to hire them. In order to tackle the difficulties arising from this situation, Paris, Frankfurt and Stockholm have developed pilot projects and experimental actions.
The city of Stockholm conducted a pilot-project aimed at 68 unemployed senior managers. It consisted of three types of activities: meetings in group sessions and for individual coaching, computer training, as well as a program to get back into shape. Participants found it increased theirs elf-confidence, helped them identify skills, helped them find new contacts and develop new job search techniques.
One of the projects developed in Frankfurt aimed to change the employers' perception towards unemployed senior managers. An image campaign was launched and a label "employers with a vision" created. The city of Paris also ran several projects to reduce unemployment among seniors, including a number of awareness raising actions, training schemes and studies.
The final conference will be organised in Paris, on 20 and 21 November 2008 where the main findings of the projects developed in Paris, Frankfurt and Stockholm will be presented.
The "Senior Competence" project is an initiative from the European Commission based on the Innovative Measures of the European Social Fund (Article 6). The project was launched in November 2006 and will last until November 2008. The Council of European Municipalities and Regions (CEMR) is partner in the project.
Click here to view seminar presentation slides.