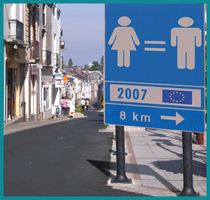 Final conference on CEMR's Charter: acting locally for equality between women and men

How to implement the European Charter for equality of women and men in your municipality or region? This will be the main theme of the conference organised by the Council of European Municipalities and Regions (CEMR), on 20-21.February 2008, in Pisa (Italy).
The conference "Acting locally for equality" will mark the 25th anniversary of the first conference of local and regional elected women representatives of CEMR, which took place in the same city. It will be the occasion to evaluate the first results achieved through the Charter, as well as allow for an assessment of European policies and CEMR actions for equality carried over the last 25 years.
Based on the early experiences of the signatories and examples of implementation gathered throughout the project by CEMR, this conference will focus on key priorities for local and regional government in their work on implementing the Charter, in order to begin to draw up means to support the Charter in years to come at European level.
At the conference, participants will debate on regions' contributions to the implementation of the Charter, examples of good practices at the local level, and the implementation of the Charter in the years to come. A final declaration and conclusions -Pisa - 25 years later: continuing towards equality' will be presented at the end of the conference.
Registrations are open till 15 January (to your national association).
Venue: Teatro Verdi, Via Palestro, 40 / 56127 Pisa
The announcement of CEMR conference "Acting locally for equality"
List of signatories of CEMR's charter